Skyscrapers are the world’s tallest buildings. They first appeared in New York and Chicago at the end of the 19th century. Skyscrapers are often like small cities. They offer space for offices, apartments, shops, hotels, restaurants and other services. Tens of thousands of people live and work there.

Skyscrapers have two parts: the foundation is the part below the ground and the superstructure is the part above the ground. Both sections hold the weight of the building.

A skyscraper needs careful planning before it can be built. First a big hole a few stories deep is dug into the earth. Sometimes this foundation reaches into solid rock. Then steel and concrete beams and columns are placed into it. They carry the weight of the superstructure.

When the foundation is finished cranes are used to raise a steel frame up into the sky. The pieces of this frame are bolted together. As it moves upward other workers lay floors and hang in the outside walls. The complete structure of the skyscraper must be finished before the inside systems can be installed.

A skyscraper must also be able to hold off strong winds. Modern buildings are able to swing a few meters in each direction, like a tree, without damaging the structure. Sometimes a steel core rises upwards from the inside of the building to give it better support.

Corridors, staircases, elevators, heating systems, air conditioning, and electrical systems belong to the most important inner elements of a skyscraper. Although the outside structure can be completed in a few weeks it may take years to finish the whole building.

Pumps bring clean water to all parts of the skyscraper, the drainage system carries away water and waste materials.

Air conditioning and heating systems control the temperature in the building the whole year round. Electrical systems provide power and communication throughout the building and wires carry electricity to each floor. Elevators are the most important systems of a skyscraper. They carry people up and down at speeds of up to 500 meters per minute.

Two discoveries in the middle of the 1800s made it possible to build modern skyscrapers. Before the Industrial Revolution brick and stone walls carried the weight of buildings. Because each floor was very heavy it was impossible to build very high houses. In the middle of the 19th century, steel became an important building material. This metal was strong and light. Architects could now construct a steel skeleton to support very tall buildings. Chicago’s Home Insurance Company Building was ten stories tall and the first skyscraper to use such a steel construction.

Skyscrapers would have been useless if people had to walk up and down many flights of stairs. In 1853 an elevator safe enough to carry passengers was invented by Elisha Graves Otis.

During the early 20th century the construction of tall buildings became very popular in big cities. Cities grew bigger as more and more people could live and work there. Tall buildings were also seen as a symbol of power and greatness. Thus, major cities, especially in America, fought for the tallest buildings in the world. For four decades the Empire State Building in New York was the world’s highest structure. The 381-meter high landmark has 102 stories and was completed in 1932. The World Trade Centre finished in 1973, became a symbol of the city’s economic strength. Even though many New Yorkers did not like them at the beginning, they got used to the “Twin Towers” in the middle of Manhattan. The destruction of the World Trade Centre in the terrorist attacks of 2001 hit the heart of the city.

Today the world’s tallest buildings no longer stand in America. Other countries, mainly in the growing regions of Asia, have entered the prestigious race for the tallest structures in the world. The 452 meters high Petronas Towers in Malaysia, completed in 1996, became the first skyscraper outside the US to climb the top of the list. The Taipei 101, at a height of 508 meters, is currently the tallest completed building in the world, but the Burj Dubai which is expected to be completed in 2008 or 2009 will be over 700 meters high.

As the race for the world’s tallest building continues most experts have different opinions on how tall skyscrapers can become. Some say building a 1000-meter high structure would be no problem with today’s technology; others think that we would need lighter, stronger materials as well as faster elevators to make this possible. 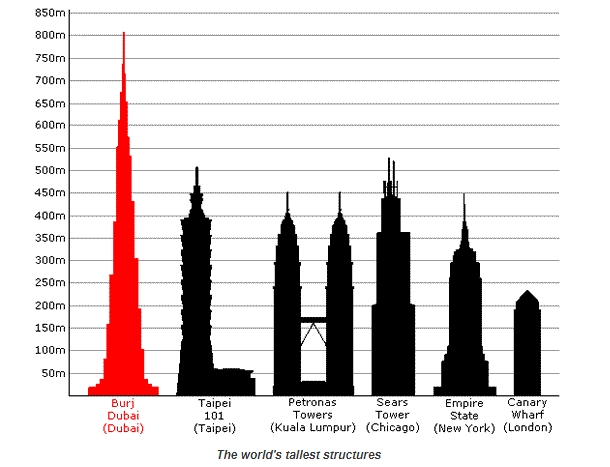 Burj Dubai is a supertall skyscraper that is currently being built in Dubai. When it is completed, it will be the tallest man-made structure ever built. At a cost of about 4 billion dollars, the tower will symbolize Dubai as a world city.

The final height of the building is still a secret but it could have up to 160 stories and reach a height of 800 meters. The foundation has been laid 50 meters into the ground.

The Y-shaped tower consists of stainless steel and glass. It rises to the sky in steps from the middle of a man-made lake. In Islamic architecture, these steps symbolize rising towards heaven.

Burj Dubai will have apartments, shops, swimming pools, spas and an observation platform on the 124th floor. It is also expected to have the first hotel owned by Italian’s fashion tsar Giorgio Armani.

A total of 56 elevators carrying 40 people each will be able to move passengers at 18 minutes/second, a new world record. 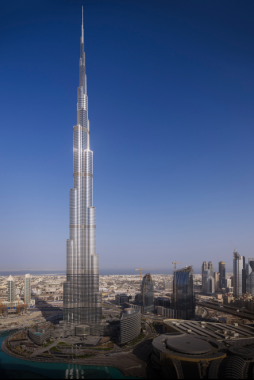