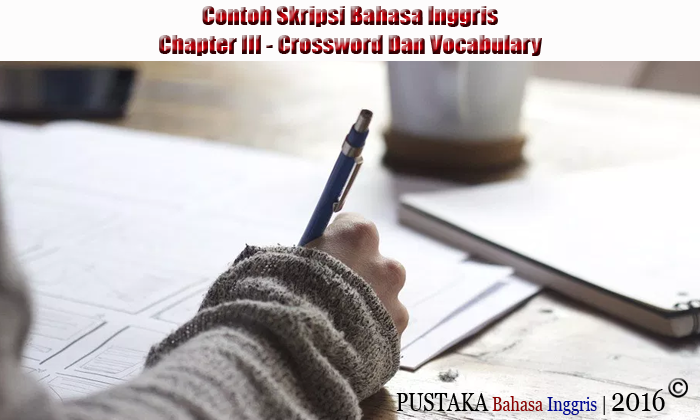 CHAPTER III
THE METHOD OF THE RESEARCH

3.1 Method of the Research

3.2 The Variable of the Research

In this research there are two variables, as follow:

3.3 The Operational Definition of Variable

The operational definition of the variable is used to describe the characteristics of the variable that was investigated by the researcher:
1. An Easy Crossword is the teaching technique that designed to improve students’ vocabulary mastery.
2. Students’ vocabulary mastery is that knowing the meaning of English words and being able to use the words appropriately various context or the student’s knowledge about vocabulary which knows the meanings of the words and able to use it. It is indicated by the score achieved from the test given.

3.4. The Population, the Sample, and the Sampling Technique

In this research, the students of SMP Budi Mulia Kedaton, Bandar Lampung at the second semester in academic year 2009/2010 had a class of class seventh. It consists of 39 students. Total populations were 39 students.

The writer took only one class because there is only one class in SMP Budi Mulia Kedaton, Bandar Lampung at the second semester in academic year 2009/2010.

Conducting the research, the writer used Total Sampling Technique. It means that based on the population and sample the writer took the sample totality because there is only one class of the seventh class.

In the research, the writer needed some data to complete the research. The writer used some technique for collecting data, that is:

In this research, the writer gave the students a test. The test is multiple choices to know the students’ vocabulary mastery.

In order to be able to collect the data, the researcher uses observation to find out appropriate data, the writer uses the observation to know the condition of the school, the material of the students themselves. In this case, the writer saw the way of teaching and learning the process in the class especially in English.

3.6 The Validity and Reliability of Test

3.6. 1 The Instrument Test of Research

To know the reliability of the test, the writer did the tryout. The sample is out of the sample. The steps of doing the try out are as follow:
1. Perform the test to 20 students.
2. Divide the result into even and odd member.
3. Analyze the result by using Product Moment Formula as follow:
4.   For determining reliability test, the writer did the try out first, used the formula of Sperman Brown as follows:

This is represented by the following formula:
To find out the correlation between odd and even group, the writer used the product moment formula as follow:

Then to determine the reliability of using An Easy Crossword, the writer continued calculating by using Spearman-Brown as follows: