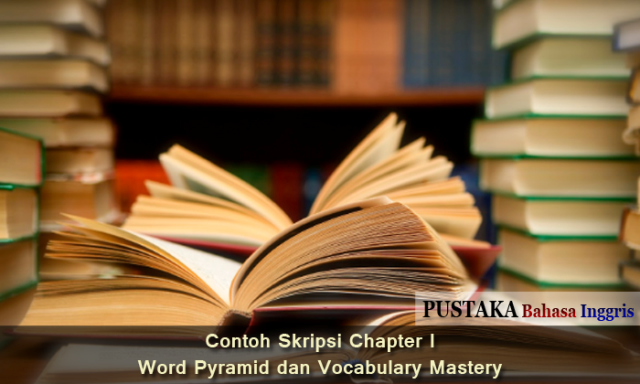 1.1 Background of The problem

English is bridges of knowledge. To follow the globalization era is as same as with mastering English because almost all of the knowledge in the world uses English. English is an international language. English is used almost in all aspect of our daily activities such as technology, trades, economics, politics, and literature. It is used as a means of communication language among countries. It is the reason why English is so important for us.

In Indonesia, English has been taught as the first foreign language that should be learned because almost all of science and technology are written in English. The Indonesian government decides English as the first foreign language, which must be taught from junior high school up to university. Nowadays English is started to be taught to elementary students as the local content.

In our educational system, English takes an important part. We want that our graduate is the people who can keep up with the competition in technology and knowledge. Our latest curriculum (KTSP) emphasizes that the graduate has to fulfill the following competencies:

It means that the objectives of teaching English at Junior High School are:

Based on that curriculum, our students are expected to master four skills namely listening, speaking, reading, and writing. These are four skills that we need when to discuss language.

Vocabulary is an essential aspect for everyone who wants to learn a language. Although someone is good at grammar, for example, he can not ignore the existence of vocabulary. When he or she speaks English, he or she expresses an idea using a number of English words that are arranged in an acceptable way. When he or she read a book written in English, moreover, he or she reads a number of English words that are composed systematically using acceptable English grammar.

(Hornby, 1984:959) states that vocabulary is the total number of words which, with the ruler for combining them, make up a language.

(Jill, 1990) The emphasis in the game is on successful communication rather than connect ness of language. Games are activities with the rule, a goal and an element of fun. Games, therefore, are found at the fluency end of the fluency-accuracy spectrum. The game should be regarded as an integral part of the language syllabus. Games are competition among players, which the children can learn to play to get information, make creative, motivated, and make the students interest with the technique of strategy game that the teacher gives. Word Pyramid Game is a free online single player word game. Online means that playing by using internet connection. The players begin with two letters at the top of the pyramid. On each word, the players have to add another letter and rearrange them to form a new word to try and fill up the word pyramid. The aim of the game is to try and score as many points as the players can by filling word pyramids.

In our view, the students just memorize the vocabulary without imagining in their mind about the things what they have learned because the teachers only give the words of vocabulary without using the various technologies or suitable media. It happens in SMP Budi Mulia, Kedaton, Bandar Lampung. They are still difficult to learn vocabulary; it is caused by the teachers who taught without various techniques or media.  So in this research, the writer tries to prove that by using word pyramid game, it can increase the students’ vocabulary.

Based on the background of the problem the writer proposed a research entitled The Influence of Word Pyramid Game toward Students’ Vocabulary Mastery at the Second Semester of Grade VII of SMP Budi Mulia, Kedaton, Bandar Lampung in 2011/2012.

1.2 The Identification of Problem

1.3 The Limitation of Problem

Based on the Identification of the problem above, the writer limited the research problem. The limitation of research focused on The Influence of Word Pyramid Game toward Students’ Vocabulary Mastery.

1.4 The Formulation of The Problem

1.5 The Objectives and Uses Of The Research

1.5.1. The Objectives of the Research

The objectives of the research are:

The uses of the research are:

1.6 The Scope of The Research

The scope of the research are:

The subject of the research was the students of the second semester of grade VII of SMP Budi Mulia, Kedaton, Bandar Lampung.

The research object was the influence of word pyramid game toward students’ vocabulary mastery.

The research was conducted in the second semester of grade VII. It lasts from April to May 2011.