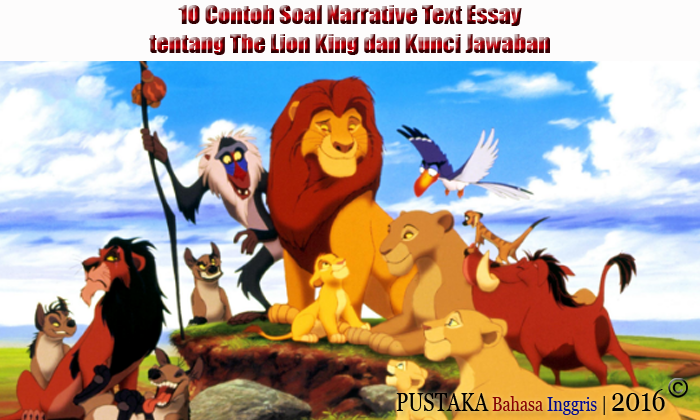 In the Pride Lands of Africa, a lion ruled over the animals as a king. The birth of King Mufasa and Queen Sarabi’s son Simba created envy and resentment in Mufasa’s younger brother, Scar, who knew his nephew now replaced him as heir to the throne. After Simba had grown into a young cub, Mufasa gave him a tour of the Pride Lands, teaching him the responsibilities of being a king and the Circle of Life. Later that day, Scar tricked Simba and his best friend Nala into exploring a forbidden elephant graveyard, despite the protests of Mufasa’s hornbill majordomo Zazu. At the graveyard, three spotted hyenas named Shenzi, Banzai, and Ed attack the cubs before Mufasa, alerted by Zazu, saved them and forgave Simba for his actions. That night, the hyenas, who were allied with Scar, plot with him to kill Mufasa and Simba.

The next day Scar lured Simba to a gorge and told him to wait there while he got Mufasa. On Scar’s orders, the hyenas stampeded a large herd of wildebeest into the gorge. Mufasa saved Simba, but as Mufasa tried to climb up the gorge’s walls, Scar threw him back into the stampede, where he was trampled to death. After Simba found Mufasa’s body, Scar convinced him he was responsible for his father’s death and advised Simba to flee the kingdom. As Simba left, Scar ordered Shenzi, Banzai, and Ed to kill the cub, but Simba escaped. That night, Scar announced to the pride that both Mufasa and Simba were killed in the stampede and stepped forward as the new king, allowing a pack of hyenas to live in the Pride Lands.

After running far away, Simba collapsed from exhaustion in a desert. Timon and Pumbaa, a meerkat and a warthog, found him and nursed him back to health. Simba subsequently grew up with them in the jungle, living a carefree life with his friends under the motto “Hakuna Matata” (“no worries” in Swahili). When he was a young adult, Simba saved Timon and Pumbaa from a hungry lioness, who turned out to be Nala. She and Simba reconciled and fell in love. Nala urged Simba to return home, telling him the Pride Lands had become a wasteland with not enough food and water. Feeling guilty over his father’s death, Simba refused and stormed off, leaving Nala disappointed and angry. As Simba exited the jungle, he encountered Mufasa’s mandrill friend and advisor, Rafiki. Rafiki told Simba that Mufasa was “alive” and took him to a pond. There Simba was visited by the ghost of Mufasa in the sky, who told him he took his rightful place as the king of the Pride Lands. Simba realized he could no longer run from his past and went home. Nala, Timon, and Pumbaa joined him and agreed to help him.

At the Pride Lands, Simba saw Scar hit Sarabi and confronted him, but Scar taunted Simba over his “part” in Mufasa’s death. However, when Scar pushed Simba to the edge of Pride Rock, he revealed that he killed Mufasa. Enraged, Simba roared back up and forced Scar to reveal the truth to the pride. Timon, Pumbaa, Rafiki, Zazu, and the lionesses fended off the hyenas while Scar, attempting to escape, was cornered by Simba at the top of Pride Rock. Scar begged Simba for mercy, insisting that he was family and placing the blame on the hyenas. Simba no longer believed Scar but spared his life on the grounds of forever leaving the Pride Lands. Scar appeared to comply but then attacked his nephew. After a fierce fighting, Simba threw his uncle off Pride Rock. Scar survived the fall but was attacked and eaten alive by the hyenas, who overheard his attempted to betray them.

With Scar and the hyenas gone, Simba ascended to the top of Pride Rock and took over the kingdom as the rain fell again. Sometime later, with Pride Rock restored to its former glory, Simba looked down happily at his kingdom with Nala, Timon, and Pumbaa by his side; Rafiki presented Simba and Nala’s newborn cub to the inhabitants of the Pride Lands, and the Circle of Life continued.

Send this to a friend