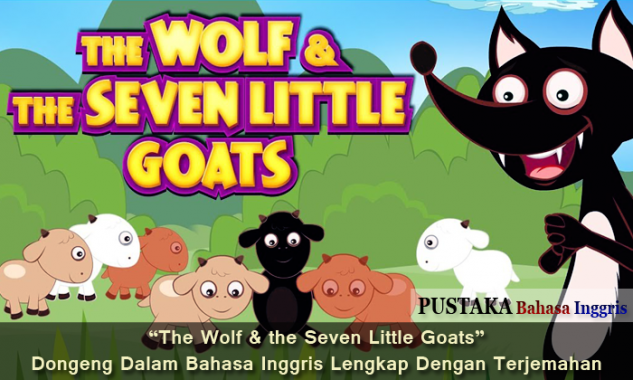 The Wolf and the Seven Little Goats

Once upon a time, there lived an old mother goat in a pretty little cottage on the edge of the forest. She had seven little billy goats, and she loved them all dearly. On occasion, she would have to leave the cottage to get food for herself and her kids, and today was one of those occasions. She called all her kids together to give them a little lecture on safety. “Listen carefully, my dear children”, she began. “I need to go out to get some food, and I want you all to be very careful because I heard there is a wolf about. If he comes here and sees you out and about he will surely gobble you all up, all of you, your skin, your ears, your teeth, your guts, everything. He is a very crafty wolf, and he may well try to deceive you by disguising himself, so stay inside the house, and don’t open the door to anybody!”

“Don’t worry, mother, the little goats replied, “we will be really, really, careful, and do everything you say. We won’t let anybody in, don’t you worry about us!” And so she shooed her seven little billy goats into the cottage and made sure they locked the front door before she went on her way, into the forest.

I think that wily old wolf must have been hiding behind a tree and have been watching the old mother goat because only a few minutes later there was a loud knock on the door. “Who’s there?” shouted the oldest of the kids. “Open the door!” the wolf replied, “It is your mother and I’ve got some nice things for all of you!” But the little goats heard the rough voice and knew that this was not their mother, so they said: “You’re not our mother, she has a really nice sweet voice, and you sound all rough and rotten. You must be the wolf, so go away, because we won’t open the door!”

So the wolf went away and thought about how he could disguise his voice. He went to see the bees and bought a pint of honey, which he downed in one go, to make his voice nice and sweet. Then he went back to the goats’ cottage and knocked on the door again. “Open the door, my children”, he called out. “It is I, your dear mother, and I’ve brought some wonderful things for all of you to feast o!” But without thinking, in order to make sure his voice was gentle, the wolf had placed his great big black paws on the window, and the billy goats saw them, and they knew something was wrong. “No, no, no”, shouted the oldest billy goat, “our mother does not have great big black paws like that! Hers are dainty. You must be the wolf! We won’t open the door for you, ever!”

The wolf went away again and thought how he could disguise his paws. He had a brilliant idea. He rushed around the corner, where the baker lived, and asked him to put some dough on his paws, saying he’s hurt his foot running away from a hunter. From there, he ran to the miller and asked him for some white flour to put on the dough that covered his paws. But the miller was reluctant to do so because he assumed that the wolf was up to one of his tricks. But the wolf growled at the miller fiercely, and said: “Come on, give me some flour or I’ll bite your nose off!” So the miller put some flour in a bag, which he gave to the wolf, and immediately locked his door as soon as the wolf had gone on his way. Wolf now rushed back to the cottage, and when he got there, he opened the bag with the flour and sprinkled it all over the dough that covered his paws. “Now we’ll see if those miserable billy goats won’t open the door”, he muttered to himself.

So he sauntered outside, found a nice cozy place under an apple tree, and went to sleep. It did not take long before he was snoring loudly.

Eventually, old mother goat returned with her shopping, and to her consternation, she saw that the front door to the cottage was wide open. She ran inside and started crying; what a mess, all the furniture was upside down, the wash tub had rolled over, and the bed covers were on top of the cooker. She knew that this could only mean one thing: the wolf had been in here and had taken all her children. She groaned and she wailed. But then she heard a little voice coming from a corner of the room: “Mummy is that you?” She stopped crying, and replied: “it’s me, where are you? What happened here?” Then the littlest of her children came out from his hiding place behind the grandfather clock, and told her everything that had happened. “oh dear, oh dear”, the old mother goat cried, “what a calamity!!” She decided to have a look outside to see if any of the others might have got away, and there, under the apple tree, she saw the bulky figure of the old wolf, fast asleep and snoring like he had swallowed a few pints of schnapps. She went up close to him, and she saw that there was some movement inside the wolf’s stomach. That made her think that her children might still be alive, inside that horrible creature. She rushed into the kitchen and got a big pair of scissors. She proceeded to cut open the wolf’s stomach, and as the hole, she was cutting got bigger, she could see one head, that came sticking out, then a tail, and then a leg. She cut as fast and as far as she could, and before long, her six children jumped out of the wolf’s stomach, one after the other. The old mother was filled with joy. That nasty wolf had been so greedy that he had just gulped them all down, without chewing, so that not only were they still alive, but they were all in one piece!

She rushed inside again and came back with a great big needle and some thread. She told her children to go and fetch some large stones. “We’ll fill up his stomach with stones, she explained, and then we’ll stitch him up again. That will teach him a lesson!” each of the little billy goats soon came back with a big stone, as big as they could carry, and old mother goat deposited them all inside the wolf’s stomach. Once that was done, she proceeded to stitch him up again, and when that was finished, they all went inside the cottage, where they all sat by the window and watched and waited for the wolf to wake up.

Eventually, the wolf did wake up. He felt rather tired and heavy, especially heavy. And thirsty, boy, was he thirsty! With great difficulty he managed to raise himself and started tottering towards the brook, moaning and groaning all the while. “Oh boy, oh boy, I am so thirsty, I could drink a whole river!” Eventually, he came to the brook and lowered his head to take a drink. But he was so heavy, what with all these stones in his stomach, that he just slid down the bank and straight into the water, where he disappeared below the surface and drowned.

The old mother goat and her seven little billy goats had followed the wolf at a safe distance, and when they saw the nasty creature disappear beneath the waves of the rook, they all started singing and dancing: “The wolf is dead! The wolf is dead, our dear mother tricked the wolf and now he is dead! Hurrah, hurrah!” old mother goat called all her children together. “Now listen to me, she began, first we’ll go and clean up the house, then we’ll have a big party with some of the wonderful things I brought back from the forest to celebrate that we all survived this adventure!” And the seven little billy goats had the best ever party of their lives!