The Cold War was the time of rivalry and conflict between the USA and the Soviet Union. It started at the end of World War II and ended with the collapse of communism at the end of the 1980s. It was a time of political tension, in which both superpowers tried to prevent each other from gaining too much power. Even if the conflict did not result in a real war, there were many situations in which the world was very close to it.

Although the United States and the Soviet Union were allies during World War II, they had different ideas about the future of the world. At the end of the war, the Soviets controlled much of Eastern Europe and installed Communist governments there. The United States, on the other side, wanted to stop Communist ideas from spreading. It helped Western European countries to stay free and also gave them big sums of money to help rebuild their weak economies. The border between the Communist east and the free west was called the Iron Curtain and ran straight through the middle of Europe. 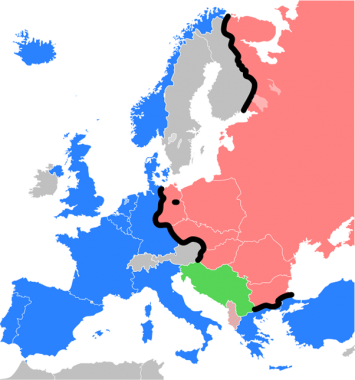 Two of the major events of the Cold War took place in Berlin. After World War II the city was divided into four zones. The French, British and American zone became West Berlin and the Soviet zone became East Berlin. When the Soviets tried to cut off supply routes to the city the Americans reacted by airlifting food, clothes and other supplies to Berlin to help the city survive.

Another political and military showdown took place in Cuba. In 1959 rebel leader Fidel Castro overthrew western leaders and installed a Communist government on the island. Soon, the Soviet Union sent supplies and weapons to support Cuba.
In 1962 the Soviet Union set up nuclear missiles on the island. To the Americans, nuclear missiles 90 miles from the coast of Florida was an unacceptable threat to their safety. After days of conflict and tension, the Soviets finally agreed to remove their weapons from Cuba.

The Cold War spread to other parts of the world as well. The Soviet Union tried to expand their influence to Asian countries. Mao Zedong became the first communist leader in China in 1949. The Chinese nationalists were driven off the mainland to Taiwan. In the years that followed, however, China challenged the Soviet leadership in the Communist world.

After World War II the Soviets occupied the northern part of Korea and set up a Communist government there. When North Korean forces invaded the south in the 1950s, the United States led allied forces against the Communist north. After three years of fighting the Korean War came to an end. The peninsula was divided into North and South Korea.

Later in that decade, the Soviets spread their influence to Indochina. After the French had been thrown out of Vietnam in the 1950s the country was divided into a Communist north and free south. North Vietnam, however, wanted to unite Vietnam under Communist rule. Soon the Americans got involved in the war on the side of the South Vietnamese. After a decade of fighting the Americans and South Vietnamese were defeated and the Communists reunited the country. In 1979 the Soviets invaded Afghanistan in an attempt to stop Islamic influence from spreading to their southern borders. 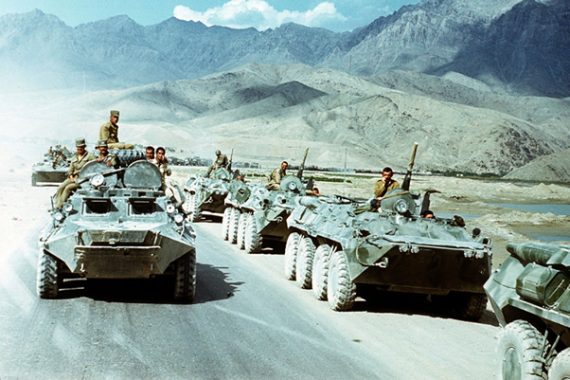 Four years after the atomic bomb had been dropped over Hiroshima and Nagasaki, the Soviets exploded their first atomic bomb and became a nuclear power. During the decades of the Cold War, both countries increased their nuclear stockpiles. They developed intercontinental missiles which could reach all corners of the world in a short time. During the 1970s each country had enough nuclear weapons to wipe out all life on earth. Later on, they agreed to stop the arms race and set a limit to the number of weapons each country had.

The Soviet Union and the USA extended their rivalry in what became known as the space race. Both superpowers wanted to demonstrate their technological superiority. In 1957, the Soviets launched the first satellite into space and in 1961 Yuri Gagarin became the first human to orbit the earth. The space race ended in 1969 when Apollo 11 landed on the moon.

End of the Cold War

The latter half of the 1980s slowly brought an end to the Cold War. In the Soviet Union Mikhail Gorbachev took power. He wanted to open up the economy of the largest country on earth. His policy of glasnost and perestroika aimed at giving the Soviet population more freedom and rights.

In 1989 Communism started to collapse in many parts of Eastern Europe. In November 1989 the Berlin Wall was torn down and East Germans were allowed to travel freely to the West. In 1991 the Soviet Union ceased to exist and broke up into 15 independent countries. Communism survived in only a few countries, including Cuba.

November 9, 2009, marks the 20th anniversary of the fall of the Berlin Wall. It was an event that led to the collapse of Communism all over Eastern Europe.

The Berlin Wall was a barrier that separated East and West Germany and also split Berlin into two parts. At the end of World War II Germany was divided into four zones that were controlled by the Allies: Great Britain, France, the United States and the Soviet Union. After the war, Communist influence spread throughout Eastern Europe and in 1949 the three western powers put their zones together to form West Germany. The Soviet Union created East Germany. Although Berlin was completely inside the Soviet zone it was also divided into a democratic West Berlin and a communist East Berlin.

As years passed by West Berlin became economically richer and stronger while the people of East Berlin lived in poverty. More and more East Berliners decided to escape to the western part of the city where they hoped for a better life.

East German had to stop thousands of their own citizens from leaving the country. In 1961 the Communist Party of East Germany constructed a 150 km long wall that led through the city. In the following decades, the wall became a symbol of the Iron Curtain – the line that separated free Europe from the communist satellite states.

On November 9, 1989, the Communist government in East Germany announced that East German citizens could travel to the west without restrictions. At once thousands began to gather at the Brandenburg Gate to celebrate a historic moment. East Berliners stormed through the gate to catch their first glimpse of freedom. During the next few weeks, the wall was torn down.

Almost a year later, in October 1990 East and West Germany reunited and became one country again.

Allies = the countries that defeated Germany in World War II, above all Great Britain, France, The United States and the Soviet Union