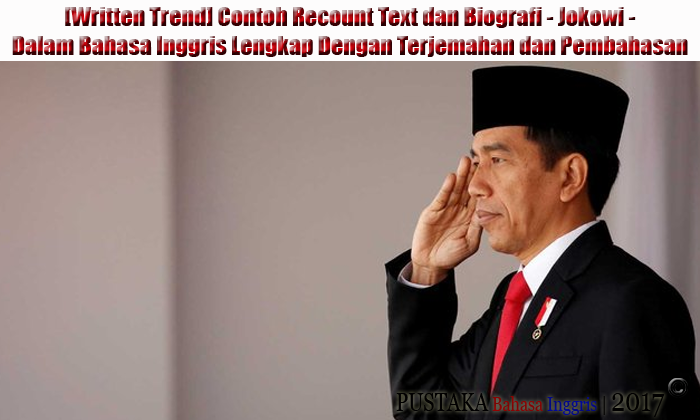 Joko Widodo is also known as Jokowi. He was born on 21 June 1961. He is the seventh President of Indonesia, in office since 2014. Joko Widodo is of Javanese descent. Before changing his name, Jokowi was called Mulyono. His father came from Karanganyar, his grandparents came from a village in Boyolali. His education began in State Primary School 111, Tirtoyoso, known for being a school for the less wealthy citizens.

At the age of twelve, he started working in his father’s furniture workshop. The evictions he experienced three times in his childhood affected his way of thinking and his leadership later on as the mayor of Surakarta (Solo) as he organized housing in the city. After primary school, he continued his studies in SMP Negeri 1 Surakarta (middle school). He had wanted to continue his education in SMA Negeri 1 Surakarta (high school), but he failed the entrance exam and went to SMA Negeri 6 Surakarta instead.

Joko Widodo graduated from Faculty of Forestry at Gadjah Mada University, Yogyakarta in 1985 to study and research about the use of plywood. Jokowi began his tenure at a state-owned enterprise company called PT Kertas Kraft Aceh but went home not long after due to his disinterest. He then began working for his grandfather’s furniture factory, before establishing his own company called Rakabu, whose namesake is the name of his first child.

The company’s fine product has its fame heard internationally, as they are also exported to the Western World. It was in France where his furniture product first started penetrating the European market. This brought Widodo to a customer named Bernard, who gave him the nickname he is famous for, “Jokowi”. Ultimately he was inspired to become a politician so that he can transform his hometown, Surakarta, after seeing the neat city layouts of Europe while promoting his furniture there.

Jokowi ran for the mayoral race in 2005 together with his running mate, F.X. Hadi Rudyatmo, winning 36.62% of the vote against the incumbent Slamet Suryanto and 2 other candidates. When he first ran for the office of mayor of Surakarta, his background as a property and furniture businessman was questioned. One academic paper claimed his leadership style was successful because it established an interactive relationship with the people of Solo, through which he was able to induce people’s strong faith in him. He adopted the development framework of European cities (which he frequently traveled to as a businessman) into his own city of Surakarta.

Jokowi’s policies during the seven years that he was mayor of Surakarta include:

Joko Widodo won the province’s 2012 gubernatorial election after a second runoff round with incumbent Fauzi Bowo. While governor of Jakarta Jokowi followed the practice (known as blusukan) of regularly arranging well-publicized visits to local communities, often in quite poor areas, across Jakarta. His inner circle of advisers in Jakarta was reported to include people such as FX Hadi ‘Rudy’ Rudyatmo, Sumartono Hadinoto, and Anggit Nugroho who were colleagues while he was mayor of Surakarta as well as Basuki ‘Ahok’ Tjahaja Purnama, his deputy as governor of Jakarta.

Jokowi continued the blusukan practice he had adopted as mayor of Surakarta by regularly visiting population centers, especially slums. During these visits, he wore simple informal clothes and stopped at markets or walked along narrow Jakarta alleys to listen and witness firsthand about issues addressed by local residents such as the price of food, housing difficulties, flooding, and transportation. Polling and media coverage suggested that Jokowi’s hands-on style proved very popular both in Jakarta and elsewhere in Indonesia.

Early after taking office in late 2012 Jokowi introduced a universal health care program in Jakarta, based on a Healthy Jakarta Card (Kartu Jakarta Sehat or KJS). The program proved popular, but implementation problems became evident. The demand for health services from hospitals across Jakarta rose by 70% in the first few months. The program involved an insurance program provided by the state-owned insurance company PT Askes Indonesia (Persero) and a plan to regulate health charges for treatment for over 20,000 services and procedures.

Jokowi launched the “Smart Jakarta Card” on 1 December 2012, in order to help poor students in Jakarta. This card gives an allowance that can be withdrawn from ATMs in order to buy school needs such as books and uniforms. The usage of the card is constantly monitored and is not allowed to be used for other purposes.

After Jokowi took office, taxes and the provincial budget of Jakarta increased significantly from Rp 41 trillion in 2012 to Rp 72 trillion in 2014. Jokowi and his vice governor, Basuki, publicized their monthly salary and the provincial budget. They also initiated programs aimed towards transparency, such as online taxes, e-budgeting, e-purchasing, and a cash management system.

In 2013, Jokowi initiated dredging and reservoir normalization projects in order to reduce flood problems. Three of the most notable projects were the normalization of Pluit Reservoir, Ria Rio Reservoir, and Pesanggrahan River. These projects involved the relocation of settlements around the reservoirs, in which Jokowi used the “lunch diplomacy” tactic in obtaining agreement from the local populace. After the inhabitants of these settlements were moved to a new location, the dredging commenced, and the project was praised by the Prime Minister of the Netherlands Mark Rutte as successful. These projects helped to reduce the extent of the flood in 2014.

Joko Widodo taking the presidential oath of office during his inauguration on 20 October 2014. After hearing the Quick Count results of many different polls, Jokowi declared victory on 9 July. However, his rival Prabowo Subianto also declared victory, leaving Indonesian citizens confused. On 22 July, hours before the announcement of the election results, Prabowo withdrew. A victory for Jokowi was expected and realized hours later. The Commission gave Joko Widodo a close victory of 53.15 percent of the vote (representing 70,997,859 voters), to Prabowo’s 46.85 percent (62,576,444 votes), though Prabowo’s camp disputed these totals.

After his victory, Jokowi stated that growing up under the authoritarian and corrupt New Order, he would have never expected someone with a lower-class background to become president. Jokowi was the first Indonesian president to not be from the military or the political elite, and the political commentator Salim Said gave the popular view of the politician as “someone who is our neighbor, who decided to get into politics and run for president”.